Problem Statement Coastal communities require reliable, accurate, and timely warning of approaching tsunamis. Presently, warnings of a potential tsunami rely on detection of a seismic disturbance with a submarine epicenter. However, the ability to quantitatively predict the tsunamigenic potential from seismic signals has not been demonstrated. Mid-ocean, bottom mounted pressure sensors could provide advance warnings for the coastal areas far from the source (far-field tsunamis), if the signals were available in near real time (Gonzales, 1995). While that represents a vast improvement over current practices, since the generation of a tsunami is verified, the resulting mid-ocean amplitude will be quite small. The critical information is the eventual amplitude of the tsunami run up at points along the affected coastline, which can be highly variable spatially. Validated transformation models, using the mid-ocean tsunami signal as input, may provide an effective warning for those situations.

When the seismic disturbance occurs near the coastline of interest (near-field tsunamis), mid-ocean sensors will not provide a warning; detection would have to come from coastal sensors. Tide gages can measure tsunamis, but their observations may be too site-specific for application to adjacent regions, particularly if the gages are sited within bays and estuaries. Assuming a tide station survives, a large tsunami could exceed the available dynamic range of the instrument. Nearshore sites on open coastlines represent a better trade-off between exposure to the signal of interest and range of applicability of the measurement. Existing coastal wave gages operated by the US Army Corps of Engineers Field Wave Gaging Program (FWGP) operate in near-real-time and meet these siting criteria at many locations around the US coastline (McGehee, 1993). The bottom-mounted gages are built to survive extreme conditions and have large dynamic ranges. In any case, local measurement of an event while it is occurring, even if instantly available, is not generally considered a warning.

The celerity of tsunamis is on the order of hundreds of km per hour, so a tsunami generated some tens of kilometers offshore will impact the adjacent coastline in minutes, before the epicenter could even be located using seismic techniques. But the low frequency of the tsunami wave means several minutes pass between the arrival of its leading edge and its peak amplitude. Can this window of opportunity be exploited to provide some degree of warning for the case of the near-field tsunami?

Hypothesis: The amplitude of a tsunami can be adequately estimated from high frequency (1 Hz) pressure measurements of its incipience, in sufficient time to provide useful information to public safety agencies.

1. A tsunami is defined as, and can be detected from, an unusually large change in the mean ocean surface slope. The change in slope will coincide with the "zero crossing" point of the tsunami waveform. The first trough or crest will occur 1/4 wave period after the zero-crossing point.

2. The period of a tsunami is constrained to a band between 10 and 40 minutes.

1. Convert the pressure time series, P, hydrostaticaly to a water surface elevation, E, and filter in the time domain by averaging over the interval a:

2. Slide the filter window forward by an increment s:

3. Calculate the slope, m, of the filtered signal between successive intervals:

4. Compare m to some preselected tsunami threshold, T; if |m| > T for some n number of incrementals, s, trigger an event at t'.

Specifying parameters The effectiveness of the method will depend on selection of the various input parameters. Reasonable ranges can be estimated from heuristic arguments, but optimum values will be site specific.

The duration of the averaging window, a, should be long enough to filter out the effects of wind waves on the mean - on the order of 10 times the dominant wind wave period. The increment s should be long enough (relative to a) to cause a measurable change in the slope between successive windows for an event of interest. However, since no warning can be obtained before one or more intervals s have passed, s should otherwise be minimized. The upper limit of warning time ranges from 2.5 to 10 minutes, so it follows that s should be less than a minute to obtain a usable warning.

The threshold T should be small enough to detect the minimum tsunami considered a threat, and large enough to reject both "normal" and unusual (but non-threatening) changes in slope. If a tsunami with a wave height below 1 m is considered "acceptable", the resulting slope would range from .8 to 3.3 mm per sec for the assumed periods. Semi-diurnal tides with a range on the order of 10 m would cause a maximum slope of less than 0.5 mm per sec. Even lower thresholds would allow reasonable sensitivity to tsunamis without being triggered by the low, mid-Pacific tides.

The number n of successive threshold exceedences required to trigger a prediction is a measure of the persistence of the change. n should be minimized to maximize the warning, and to avoid too rigorous a condition for detection. However, it should be greater than 1, since it serves as a check against false triggers caused by spurious data (spikes) or wave grouping, particularly when the incremental, s, of the window is large relative to the window length. A range of values based on this logic is presented below.

Evaluation The performance of the approach was evaluated using observations from Kahului, Hawaii for the 4 October 1994 tsunami. The data were obtained from bottom-mounted pressure sensors operated by the Scripps Institution of Oceanography under management of the FWGP. The sensors were installed to characterize the wind and infragravity wave conditions outside and inside Kahului Harbor, and only incidentally captured the tsunami. Figure 1 shows the study site and the location of the outside (offshore) and inside (harbor) sensors used in the subsequent discussion.

Figure 2a and b shows the unfiltered (1 Hz samples) pressure time series for the inside and outside gages at the arrival of the tsunami. Wind waves, tidal, and tsunami components are all obvious. The significant wave height at the offshore site was xx m at yy sec from zz. Figure 3a and b show the effect of filtering the time series to remove the wind waves. Offshore, there is a "surging" visible between 1130 and 1145, but the wave is perhaps better described as trough leading. In the harbor, it is definitely crest leading. The period of the tsunami is around 30 minutes and it's maximum height (offshore) near 85 cm, so it is a reasonable candidate for evaluating the sensitivity of the algorithm for its minimal designed detection threshold2.

Two aspects of the algorithm were tested: 1) its ability to detect the incipience of the tsunami, and 2) its ability to predict the first peak amplitude. The effectiveness of detection ability will be evaluated by the amount of warning time, W, between detection and occurrence of the first crest, C1 or trough, T1. Prediction will be evaluated by the range, R, between the predicted bounds (uc - lc, or ut - lt), and the error, e. Positive e, or overprediction, results if the actual amplitude is less than predicted:

Negative e, or underprediction, results if the actual amplitude is greater than predicted:

If the actual peaks are within the bounds predicted by the model, the prediction is considered successful:

Results are summarized in the following tables.

Note A: No trigger on first peak; second peak predicted
Note B: False trigger prior to event

Discussion Some expected trends are manifest in the results. The minimum threshold used is adequate to reject false triggers as long as more than one exceedence is used. Two threshold exceedences appears to be optimum - waiting for a third eats into warning time, and may be too rigorous a condition. Likewise, increasing the threshold delays the warning or prevents detection. A larger tsunami would be detected by the minimal threshold, so there is no benefit in raising it above the minimum.

The principal difference between the inshore and offshore signals, in terms of their predictability, is the presence of the wind waves. Wind waves obviously complicate the signal, and result in delayed warning, but do not mask the tsunami signal, even for a window no more than XX wavelengths, and an incremental less than two wavelengths. The range and error of the prediction are relatively unaffected by the wind waves.

In all cases the error is 0 (as defined) or negligible, but this "success" must be considered in light of the prediction range. Range values vary from quite useful when less than 20 cm to questionable utility at nearly half a meter, or roughly the amplitude of the tsunami. Since the algorithm uses the first slope(s) to exceed the threshold to project the bounds, a lower threshold results in a smaller range.

Preliminary tests have been done on a sinusoidal prediction model. The approach has several inherent advantages: it is a more realistic model of the actual signal; it automatically produces subsequent crests and troughs; it can continuously update its prediction based on the instantaneous value of the input signal; and ranges are reduced with no loss of accuracy. Initial results are promising, but additional testing is required.

One trend that might be expected is a trade off between warning time and range, but it was possible to optimize both. The best warning time inshore - 7.5 minute - is the theoretical maximum for a tsunami with a 30-minute period, and coincides with the minimum range. Offshore, the minimum range is associated with a 5-minute warning. Performance is enhanced by minimizing the threshold and relying on 2 or more exceedences to prevent an overly sensitive system. These values are specific to this tsunami at this site, and may not be realized in other situations. Each site can be expected to have a different optimal threshold under different conditions. Long-term observations of "normal" (non-tsunami) conditions would provide the best guidance for any location in optimizing the parameters.

Has the hypothesis been proven? It depends if public safety officials consider a warning of an approaching tsunami on the order of 5 minutes before its first peak is useful. If other, earlier information is available, such as observations from distant stations, this could be considered last-minute confirmation that the correct decision had been made. Currently, the best warning for coastal residents for a tsunami generated very near a coastline is whatever motion is felt by the affected populous from the earthquake. Often, no direct confirmation of the presence of approaching tsunami, let alone its magnitude, is available to public safety agencies other than the use of observers3 - with obvious limitations in warning time and accuracy, especially at night. Is 5 minutes better than none?

Whatever warning an automated system has would be lost or delayed by transmission of the information from the sensor to the appropriate public safety authorities. Theoretically the only information necessary is the result of the prediction algorithm, but in practice the actual signals should be viewable remotely, in real time, by public safety decision makers. This capability has been developed and demonstrated for the FWGP wave system.

Conclusions An algorithm was developed to detect the presence and predict the approximate size of a tsunami on an exposed coastline using subsurface pressure sensors. Performance was tested using data from the Shikotan tsunami. Detection of incipient sea surface slope changes allowed warning times of 5-7 minutes. Height predictions based on priori assumptions about the tsunami's period bracketed the actual crests or troughs within 20 to 30.

Acknowledgements Data used in this paper is from a study of Kahului Harbor funded by the Pacific Ocean Division, US Army Corps of Engineers. Acquisition of the continuous pressure time series was made possible through the special efforts of Mr. David Castel and Ms. Julie Thomas of Scripps Institution of Oceanography. Mr. Erik Stauber, also of Scripps, developed modifications to the wave measurement system to provide remote, real-time data access, without which the technique is only of academic interest. Mr. Frank Gonzales, National Oceanic and Atmospheric Administration Pacific Marine Environmental Lab, provided valuable feedback and encouragement during concept development. The Field Wave Gaging Program is funded by Headquarters, US Army Corps of Engineers. Permission to publish this paper has been provided by the Chief of Engineers. 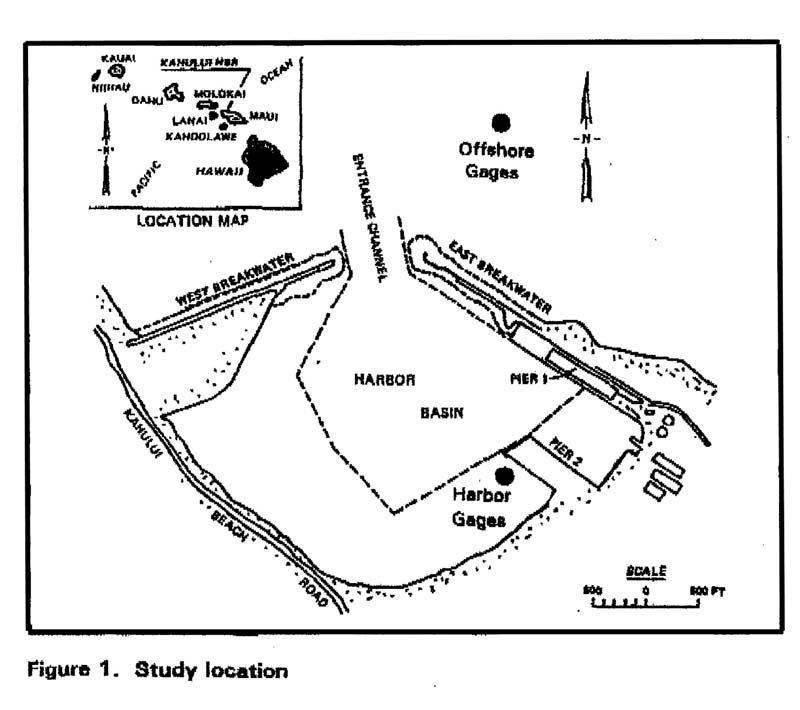 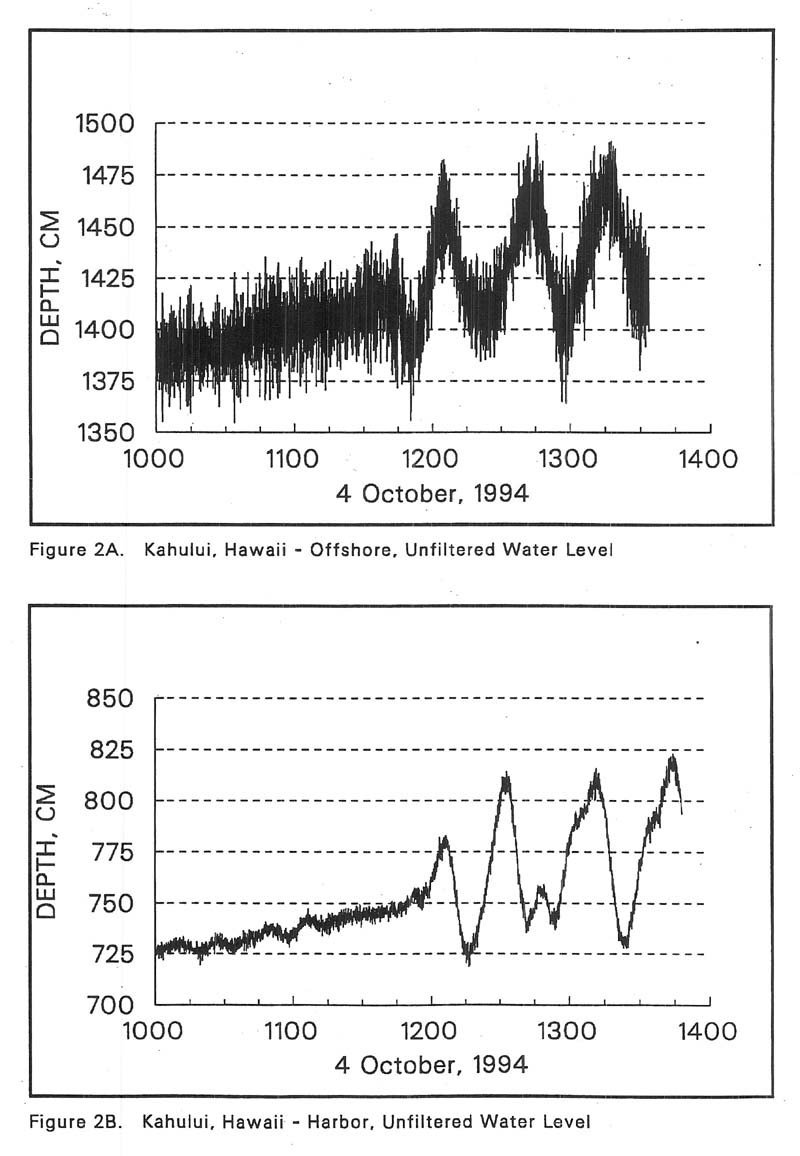 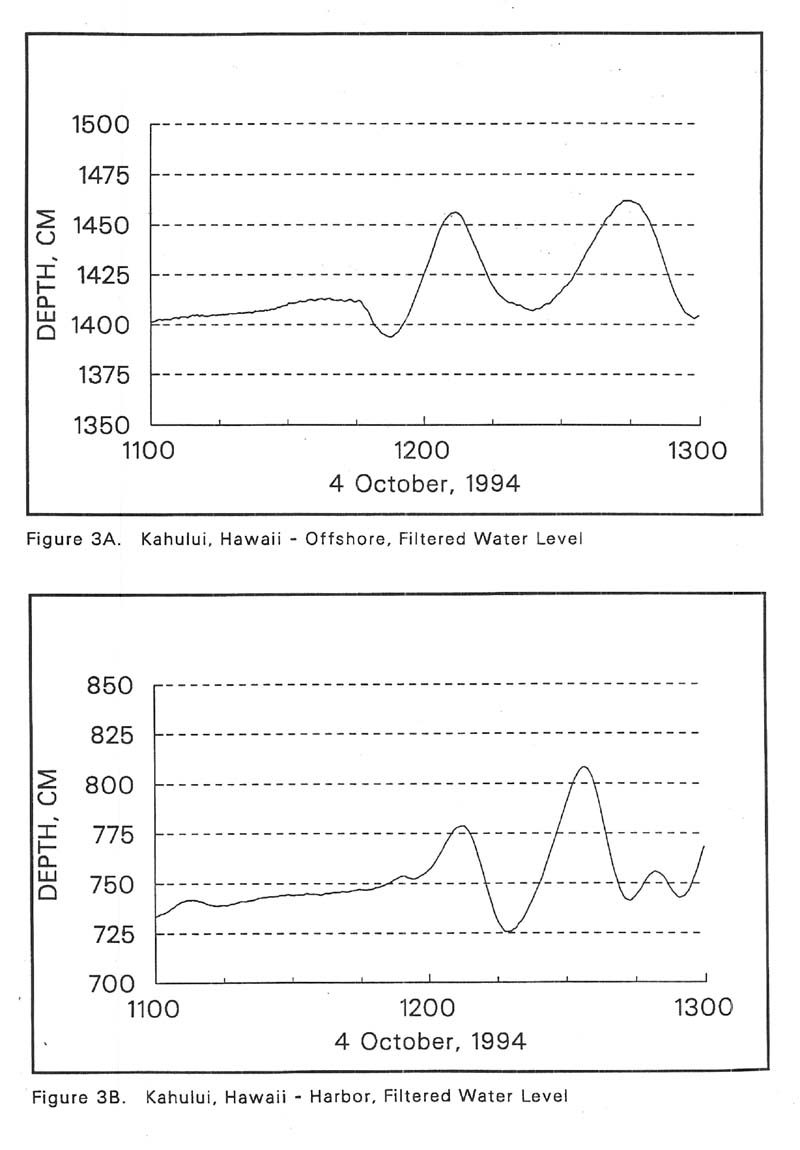